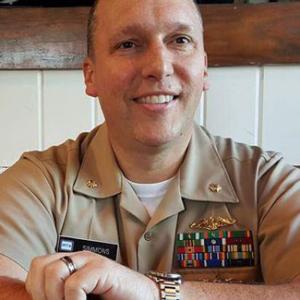 Drew Simmons has served his country with the same commitment to excellence he brings to enhancing his education, making him an outstanding recipient of the Distance Makes a Difference Scholarship awarded by the Center for Distance Education.

In one year, under Simmons' management, one division within the Engineering Department moved from "worst" to "best" during the annual Naval Reactor's Operational Reactor Safeguard Examination.

Simmons excelled in the management of technical and personnel projects but as his active duty career began to draw to an end, he decided he needed to prepare for transition into the civilian sector. With plans to retire in June 2019, Simmons decided to pursue a Master of Business Administration – Project Management (MBA-PM) degree from Mississippi State University online.

"The MBA-PM is providing me a more robust understanding of the financial aspects of engineering projects," explained Simmons. "I believe this degree will make a significant difference in my ability to become an accomplished project manager in the civilian sector."

He went on to say that the distance education program is allowing him to complete his degree, stay on active duty and still meet the needs of his family.

Simmons was excited to learn he was a recipient of a $1,000 Distance Makes a Difference Scholarship.

"I am honored, and I truly appreciate receiving this scholarship," he said. "With two children in school and me working on my master's degree, the scholarship is a tremendous help."