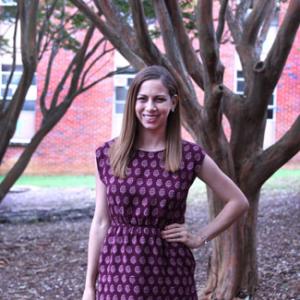 Shenti Rodriguez, Miss Puerto Rico 2013, hung up her crown at the end of her year-long reign and enrolled in the online Broadcast and Operational Meteorology program at Mississippi State University. Weather first intrigued Rodriguez when she saw the damaging winds of Hurricane George. That is when she gained a passion for weather. Rodriguez collected the maps that emergency management teams passed out before natural disasters. She pinned those maps on the wall so she could practice giving weather updates to her family viewers. After she graduated with a bachelor's degree in journalism, Rodriguez interned with Univision in Puerto Rico where she heard about Mississippi State's online meteorology program. Although her native language is Spanish, Rodriguez persevered. The language barrier was not the only obstacle she faced. She married and moved to Birmingham, Ala. for her husband's company while in the first year of the program. "Courses were difficult because of the move and translating the assignments," she said. Rodriguez also gave birth to her first child while enrolled in the program. "Raising a family with no family around to help was hard. It was even harder with school work involved," Rodriguez said. Rodriguez added the title of Bulldog to her resume in 2017 when she completed the program. She aspires to become an on-air broadcast meteorologist with the knowledge she gained from MSU. Rodriguez is grateful for the opportunity to earn her certification online. "It was hard and challenging, and I'm proud of myself for sticking with it. I did it!" Rodriguez said with tears of joy. For information about the Certificate or Bachelor's degree in Broadcast and Operational Meteorology, visit their website.
Submit a Story