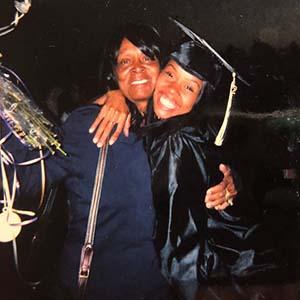 Star Brown-Harvey is a meteorologist with a mission to advance her career with online classes at Mississippi State University. From an early age, Brown-Harvey looked up to her grandmother who showed her the path to ambition and success. Her grandmother was ambitious and a hard worker, with an extensive list of occupations including roles as a janitor, bus driver, butcher, and owner of her own antique thrift store.

“She has always been my hero,” Brown-Harvey said. “As far as I knew, there wasn’t anything she wasn’t capable of. She worked her way from the bottom to the top.”

Her grandmother’s story motivated Brown-Harvey to pursue the impossible. Brown-Harvey chased her meteorology goals and strived for a life that would make her son proud. She returned to school when her son was two months old.

“I needed to be able to make my son proud and give him a mother he could brag about,” Brown-Harvey said. “He gave me the last bit of courage I needed to go after my dreams. I wanted to be the example for him that my grandmother was for me.”

Brown-Harvey's grandmother showed her strength, drive for change and courage. Becoming a journalist, Brown-Harvey realized how important it was to represent these characteristics to be a voice for people who could not tell their story.

“I grew up not seeing women that looked like me doing weather on television, so one of my biggest goals is to speak for those who may not be able to,” Brown-Harvey said. “I want to be an example to young Black people that we can write our own stories, even if it takes us more time.”

Mississippi State Online has opened many doors for Brown-Harvey's career in meteorology. She was able to go back to school, following in her grandmother’s diligent shoes as a hard worker while also making her son proud. Proving to herself that she can pursue the life she wants.

“Making the decision to obtain my meteorology career has been difficult, but Mississippi State Online allowed me to secure the last of my meteorology goals,” Brown-Harvey said. “It’s the final thing I believe I need to complete my journey to do what my Granny always knew I could.”