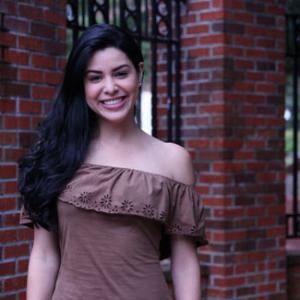 Yara Lasanta, a forecaster and reporter for Telemundo 52 in Los Angeles, California, has always had a love for weather. To excel in her career, Yara needed a meteorology certification. She was living in Puerto Rico when she enrolled in online classes at Mississippi State University.

It was the Fall of 1996. 10 year old Yara can remember being in her basement waiting out the storms from Hurricane Hortencia. Her little brother shined a flashlight at the wall imitating a hurricane, and She gave her first weather report with her mom as the camera operator. Two years later Yara saw the effects of such devastating storms, and her love for weather grew to a passion. "The view of the storm taking place was hard to take in. Roofs of houses were coming off. We went three weeks without power," she said of Hurricane George. "The community pulled together during the aftermath for cleaning up the town." It was then that she decided to become a meteorologist to spot storms and help communities better prepare for what is to come.

As a Mississippi State University online student, Yara faced more adversity than most online students. Her native language is Spanish, but she did not let that get in the way of her dreams. Yara's study time doubled as she had to translate assignments and terminology on top of actually completing the assignments. "The professors were very understanding of my struggle with the English language and were very helpful," said Yara. As the program comes to an end, Yara is grateful for the friendships and the connections she made in the program.

After completing the certificate, Yara plans to gain her Master's degree online by enrolling in Mississippi State's Master of Geosciences in Applied Meteorology program. One day, she aspires to be the first Spanish-speaking Chief Meteorologist in the L.A. market at Telemundo 52.